Why You Should Analyze Your ABC Chart 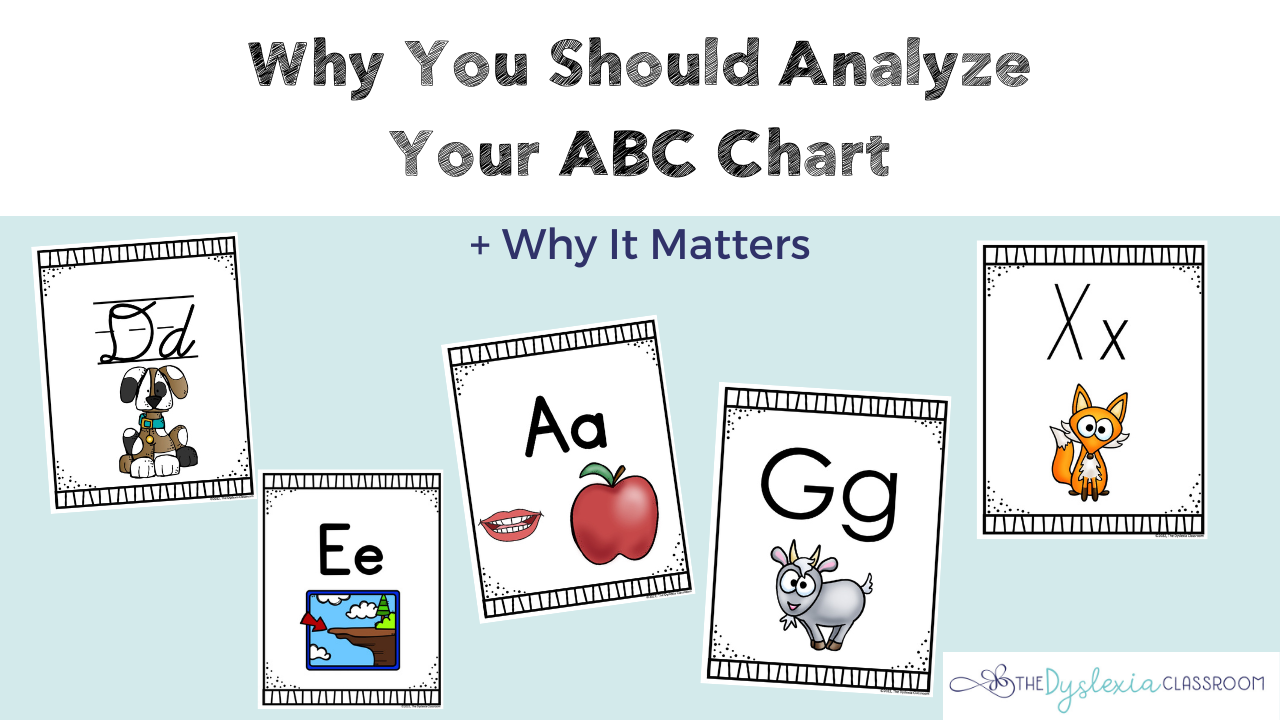 When we think of classrooms, we almost always envision an alphabet with pictures posted somewhere in the room. We may not realize that the keywords or images used in alphabet posters and books matter - a lot more than you may think! Many cute and colorful alphabet posters are available, and we may gravitate toward what is aesthetically pleasing, but these are not the best choices for our students and classrooms.

Analyzing Our ABC Charts - Why It Matters

Reading is the ability to connect spoken sounds to their letter representations. We want students to elicit the smallest unit of spoken sound, or phoneme, in its purest form. For this reason, being mindful of keywords is essential.

What does this mean? The ability to segment phonemes (sounds) into their smallest units and then blend those sounds into words is what is needed to read and spell. Keywords or pictures we choose to link to graphemes (letter/s) need to connect directly to the individual phoneme (sound).

In English, sounds are altered in pronunciation during running speech. The letters surrounding one another can be coarticulated and shift the sounds. Our awareness of individual speech sounds versus sound production in words when speaking is necessary as we analyze what keywords to use.

What keywords and sounds do we need to monitor closely?

We should be mindful of every picture/keyword we choose to connect phonemes to graphemes, but some continuously prove problematic.

Yes! Individual phoneme production is an integral part of reading and spelling instruction. Students need to be able to isolate phonemes to segment. The skill of segmenting is the ability to take apart individual phonemes, or sounds, within words. Think of these as the parking spots for the letters representing these sounds. When we help students identify the placement of their mouth for individual sound production, we create a connection between what we are hearing and how that sound feels in our mouth. Researchers have found that 25% of students receiving services for a Speech Sound Disorder also have a reading disability. We want to ensure that we are connecting keywords that assist students in producing correct sounds.

Short vowel sounds make up almost 50% of all syllable types, therefore, we need students to solidify their knowledge and production of short vowel sounds. Since most alphabet charts are used in early grades where students are learning to link speech sounds to print, it makes sense that the pictures associated with the vowel letters represent the short vowel sounds.

👆Watch this video with movements and keywords to elicit the short vowel sounds for more details.

Most of our classroom posters use the image of an apple for short a, which is helpful as it elicits a pure sound of /a/. When analyzing images on classroom charts and materials, we want to avoid those which would have "ant" or "airplane" as the keyword. Why? In the word "ant," the letter a is followed by the nasal /n/ which creates an allophonic variation distorting the sound of /a/. Say "ant" to yourself and listen to the difference in that sound versus the sound when we say "apple". You can hear how in "ant" there is a nasal sound that slightly impacts the vowel sound. It reminds me of a whiny sound. Keeping to the keyword "apple" elicits the pure sound for short a.

Many posters will use the image of an elephant or an egg. Upon first glance, this may not seem problematic; however, when we segment the sounds in the word elephant, we often hear a clipped short e with more emphasis on /l/. In addition, some children, when saying "elephant," will associate the letter L, as that is what they hear when we say the keyword. ELaphant, L. Another common picture choice is an egg. For many, depending on dialect, the /e/ can be said as /A/. It can be challenging for some children to elicit a pure sound /e/ from these word choices. Instead, words like "echo" and "edge" allow us to elongate the initial phoneme while maintaining its sound.

Another vowel sound impacted by the picture choice is /i/. Many times, alphabet charts will showcase words like "ice cream" or "igloo" or "in". Beginning readers need to gain clear knowledge and application of short vowel sound production. The keyword "ice cream" also has a slight vowel shift into /ye/ - /i/-/ye/-/s/-/k/-/r/-/E/-/m/. The keyword "igloo" has some dialect differences and can may be said with a slight /e/ sound. The word "in" is problematic because of the vowel /i/ nasalization, which picks up a slight /e/ because of the following /n/. Instead, we can use words like "icky" or "itchy" to elicit the /i/ sound in the purest form. I add these keywords before my image of an insect so my students will say and act out, "itchy insect." as we itch our arms or "icky insect" as we pretend to shoo away a bug.

In many alphabet posters, we see pictures like "unicorn" and "umbrella". The word "unicorn" begins with a gliding /y/ - /yu/-/n-/i/-/k/-/or/-/n/. This hidden 'y' shifts the vowel sound. The keyword "umbrella" has a nasal variant where /m/ alters the short u sound slightly. An easy way to adjust this keyword is to draw an arrow pointing up by the umbrella. My students will act out putting their umbrella up as we say /u/.

We know that short vowel sound production and precise keywords are critical; there are some commonly used images for consonants that need reflection. 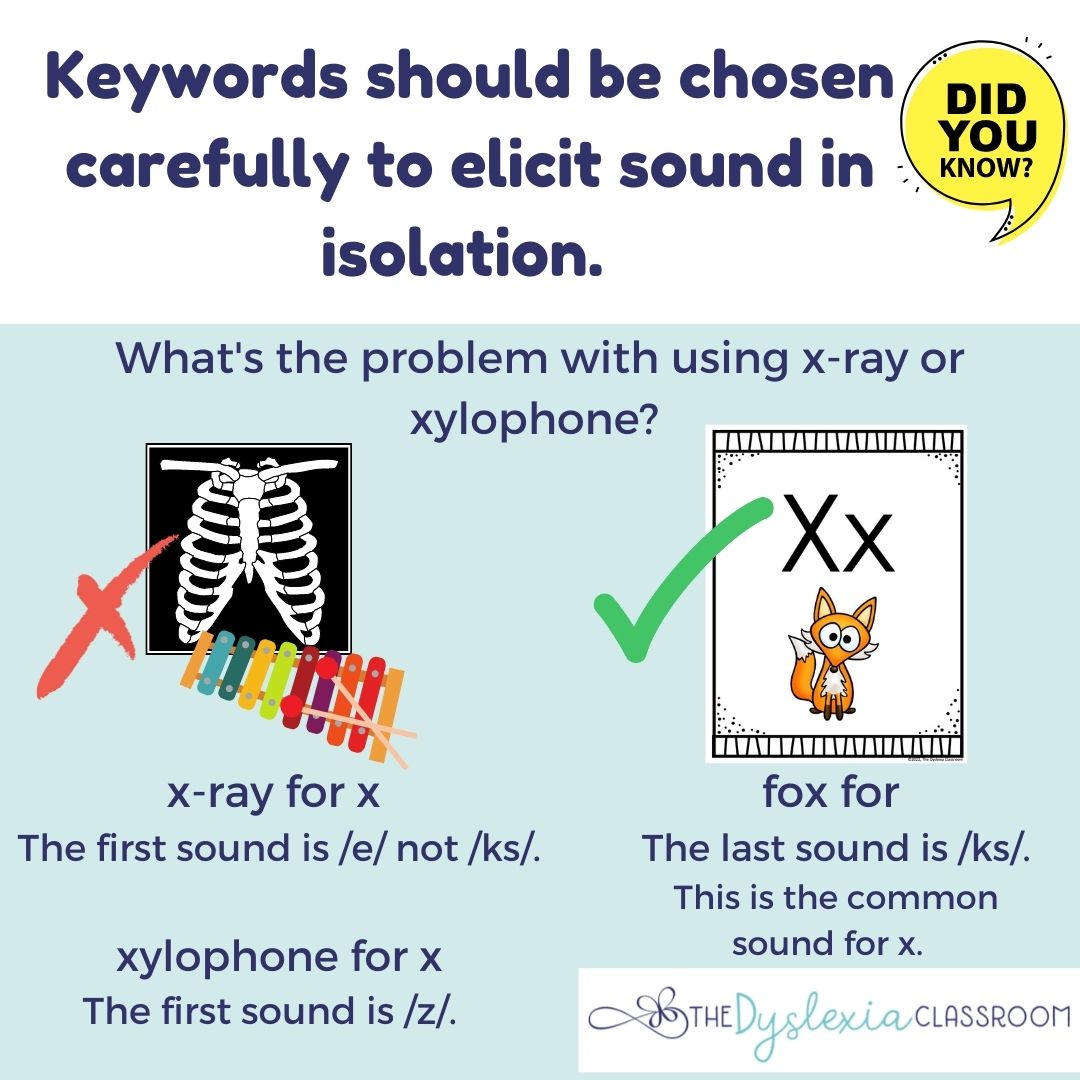 In a short Google© search, the keywords for x are visibly problematic. The image of an x-ray is seen on alphabet charts across classrooms and publishing companies, but this is not the best keyword to help students elicit the sound for x, which is /k/-/s/. When you say x-ray, you are first producing the short e sound, which is a distortion for the letter x. Another keyword seen on alphabet charts that need to be analyzed and removed is the word "xylophone." In the word "xylophone" the x represents the /z/ sound, which is not the most common sound association for the letter x. We always want to move students from the most common sound-letter production to the least. Instead, use keywords like "fox" and "box" to allow students to pronounce and isolate the /k/-/s/ sound for the letter x while reinforcing the most common sound-spelling relationship. 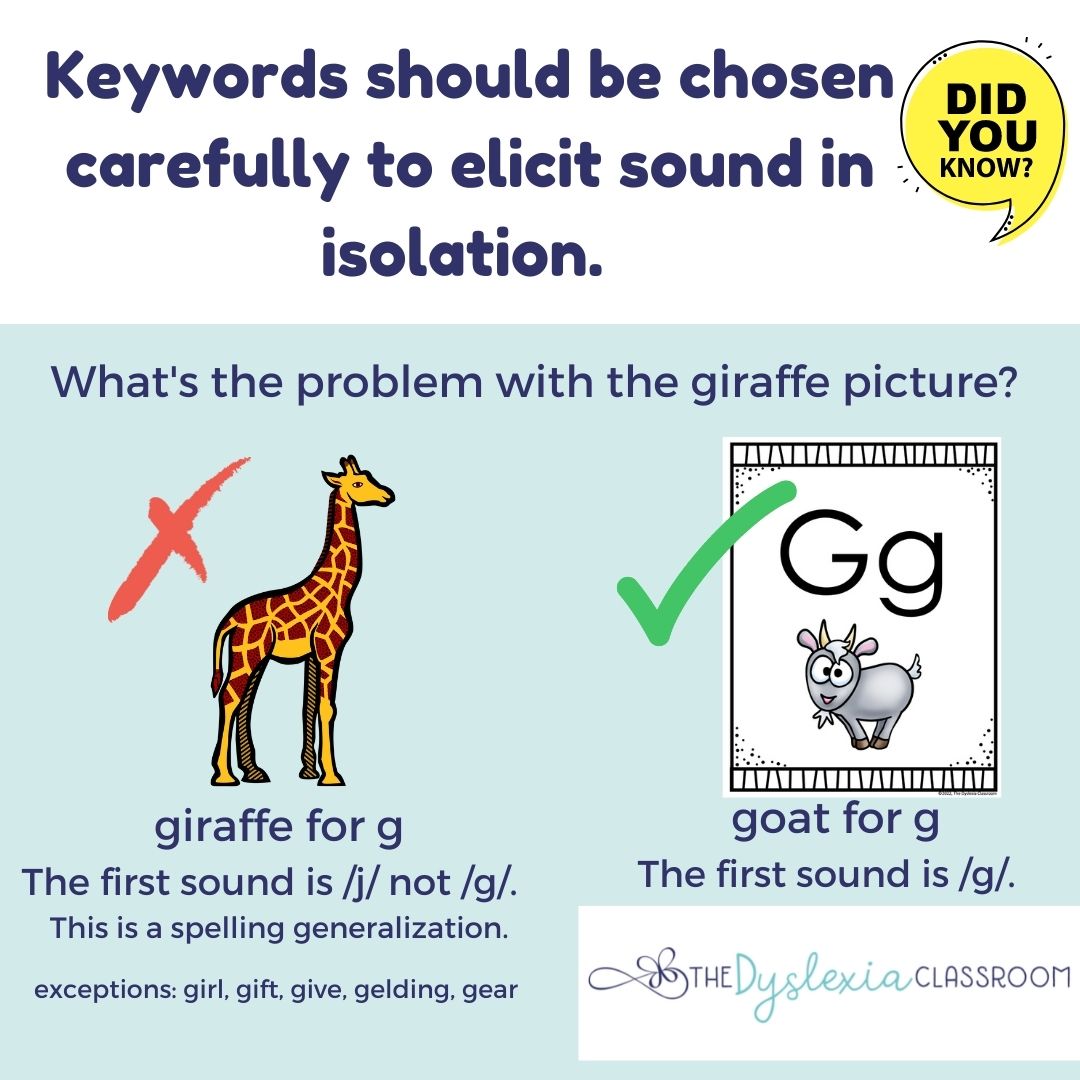 The more common sound for the letter g is the hard /g/ as in goat and gum. The letter g represents /j/ when preceding the letter e, i, or y. This spelling generalization is referred to as soft g. When using alphabet charts to link speech sounds to print, especially for those beginning readers, we want to use keywords that elicit /g/. When charts use the keyword "giraffe", it is confusing for students for several reasons. First, when saying the name of the letter g, the first sound we say if /j/. /j/-/E/ Second, the picture of the giraffe represents the soft g sound, /j/. When beginning readers are practicing decoding, they are using the hard g sound in the earlier CVC patterns like gum, go, and got.

When we use words like "grape" for /g/ or "star" for /s/, we are not providing students with a sound-letter-keyword linkage that elicits the pure sound. Keywords like "dragon" or "train" are not good choices because when we say "dragon" it sounds more like "jragon" and "train" sounds more like "chrain" in running speech.

What Educators Should Do About ABC Charts

As you can see, the keywords and images that we choose to showcase on our alphabet posters and charts in our classroom have a deep impact on beginning readers and their knowledge of sound-letter correspondences. Using our knowledge as educators, we can shift our practices and analyze our materials through the lens of research and the elements of structured literacy.

You don't need to purchase new materials; you can analyze your materials and make the necessary changes to align your keywords with sound production. 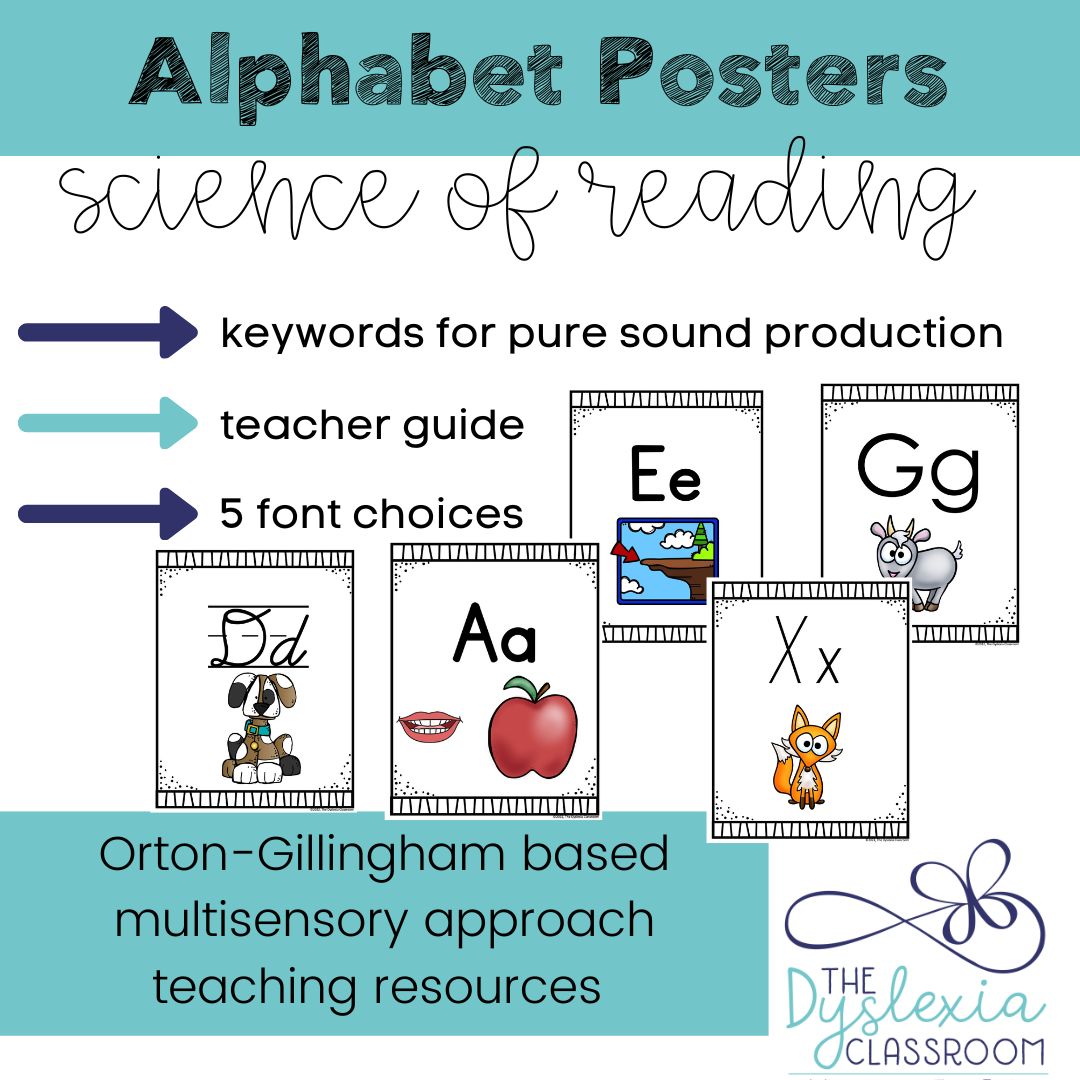 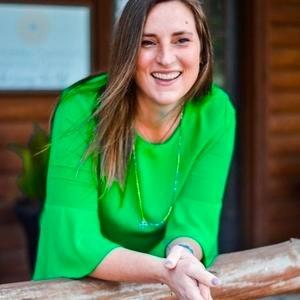 Stay connected with news and updates!

What do you want to read about? 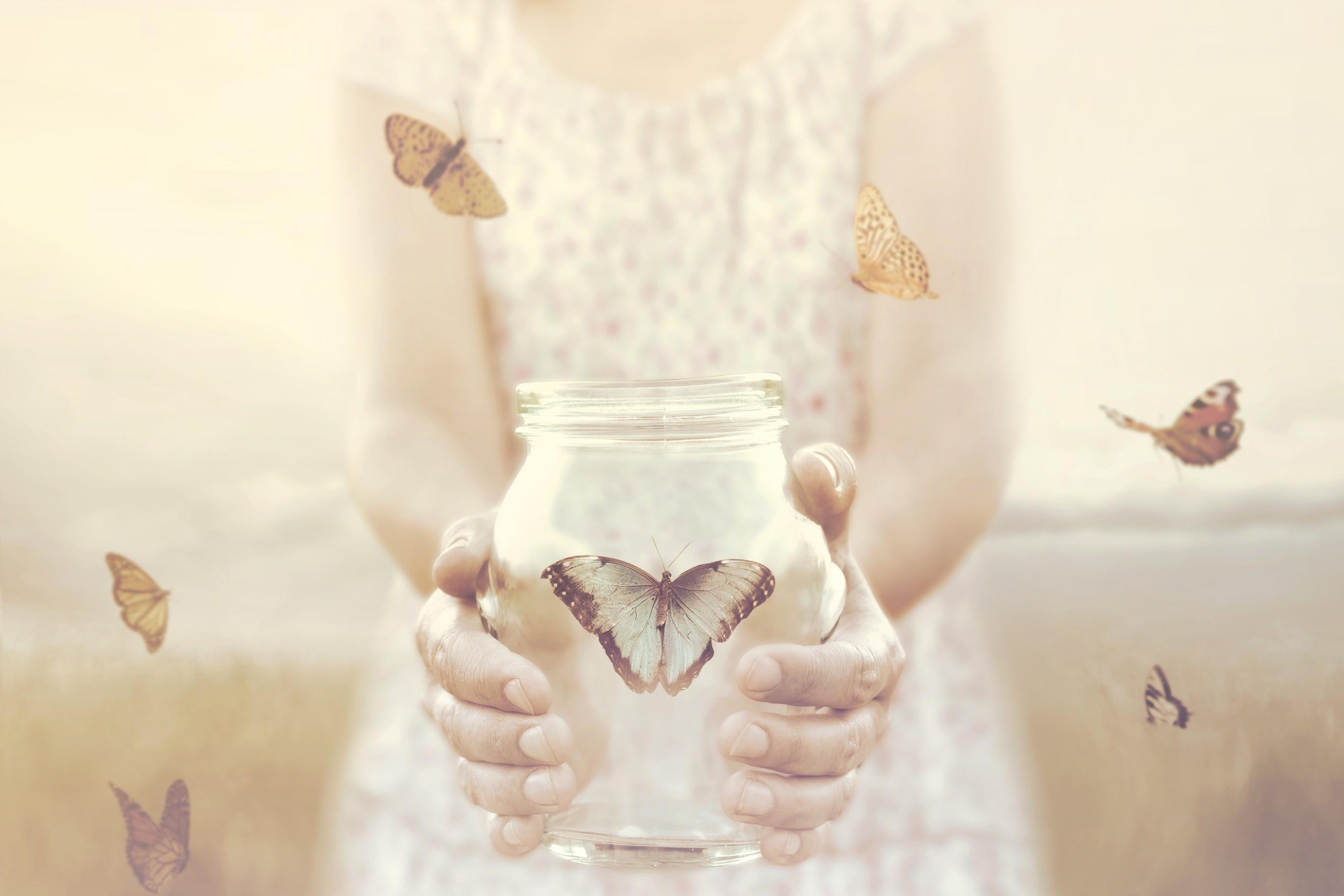 Subscribe to access the freebie library and be the first to know about courses, resources, updates, tips and more! 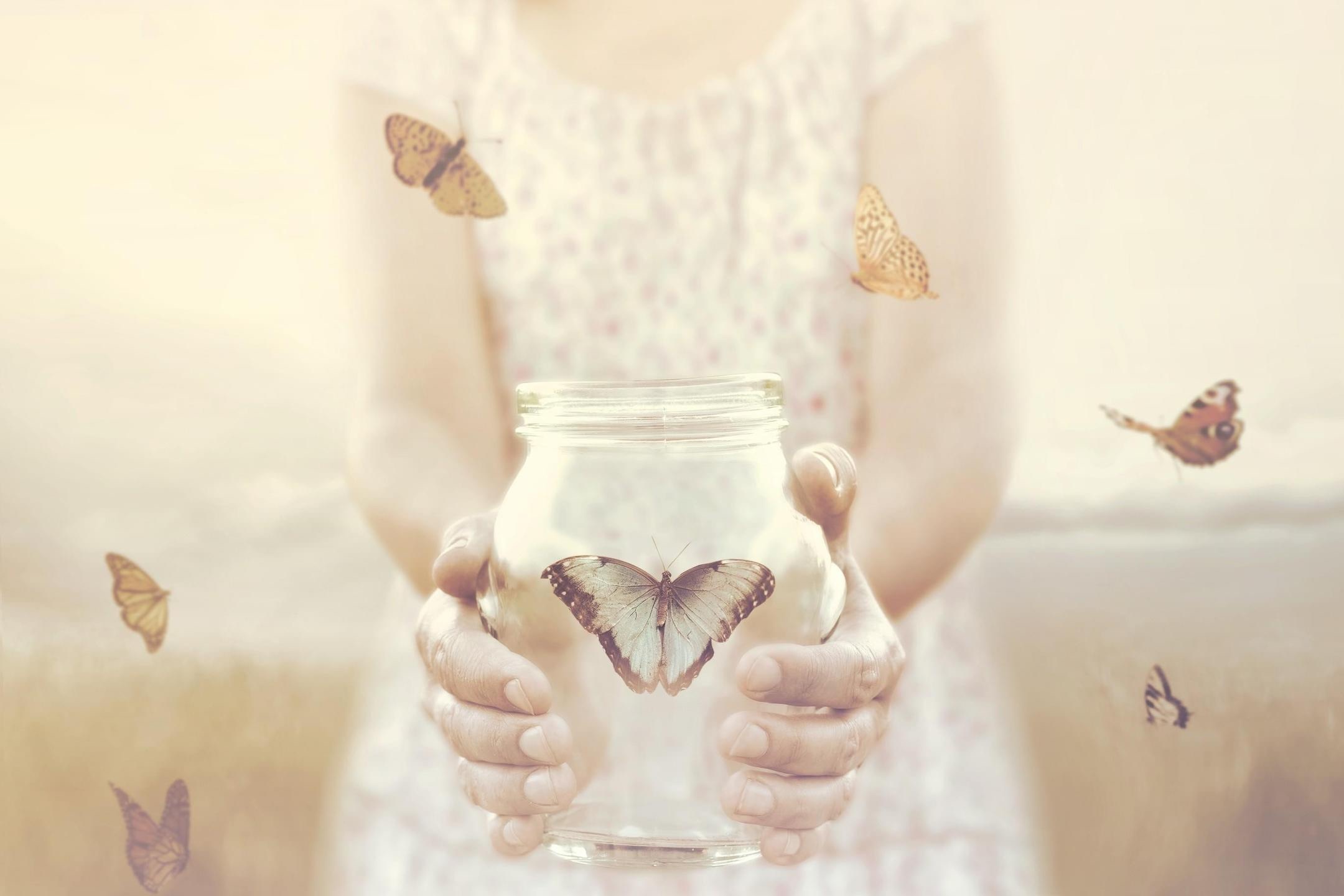 A collective of educators and parents creating connections and deepening understanding and knowledge through an empathetic approach to best help our children on their path with dyslexia.